Bi-Polar Mania - Going Over The Edge 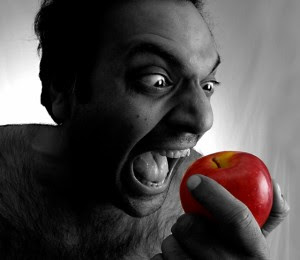 In the last post, I gave you a general overview of what Bi-Polar Mania is all about. There are racing thoughts, feelings of invincibility and rapid speech. At the end of February 2012, I went completely to the limit. This time, we'll look at my Bi-Polar Mania - Going Over The Edge.

As I mentioned in the last post, my mania had been building since I was forced to quit taking my medications at the end of November 2011.

Each day the mania built and it continued to rage.

On the night of February 21, 2012, something snapped. I came up with an idea to create a scene. I wanted to be hauled away and taken to a psyche hospital. I wanted to sleep in a bed, something I hadn't done in a long time - spending nights in my La-Z-Boy chair. And I wanted to eat three different meals a day - something that wasn't happening based on my current situation.

First, I concocted an idea, which made perfect sense at the time, to write graffiti all over the walls of the house I had been living in.

In a post last year, I wrote about the hoarder's hell that I've been living in. The house is owned by an old friend, but I live there alone. It's full of crap and I literally live in a small corner of the living room. I couldn't take it anymore, so I lashed out against he house. Graffiti, everywhere. Markers. "I am not a dog." I wrote on the walls. "They killed Natalie" - making reference to my 11-year-old daughter in Las Vegas, who has been stripped from my life by my ex-wife.

Then, I found an old photo of my ex-wife and I and put it on a cutting board and stabbed about five knives into it.

To top things off, I wrote on my stomach, "Dead" and on my face "Fuck".

Then, I had to get an audience. I started calling people and screaming messages into their phones. It was late at night, so I got voice mail on every call. I also called the Las Vegas Police and the local police and screamed, "Natalie is dead" into the phone, then hung up. It took the cops about 45 minutes to surround the house.

When they came, they all knew me from seeing me in my truck, blogging next to the public library.

Unchecked, Bi-Polar Mania - Going over the edge is inevitable.