Memorial Day means a lot of things to Americans. It can mean: Case of beer $24.00, Hot dogs and buns for the gang $18.00, the freedom to do what you want - priceless - because you cannot put a price on the blood that was shed for our freedom. 365 Day Memorial Day, find the cost of freedom.

We take so much for granted in the United States. We move freely from one city to another in our cars without checkpoints. We shop at stores for food without waiting in line for two days. We don't have to kiss our children at night and hope that a rocket doesn't wake them up and we all have to run for cover. America is a blessed land.

During two World Wars, we were not guaranteed victory. But our fighting men and women, combined with incredible courage and leadership were able to defeat enemies that would have relished the chance to rule our land. Millions of lives were lost.

In other theaters around the world, our Armed Forces have fought oppressive regimes, communism and terrorists. But all of those battles had a price. A huge price.

Little towns and big cities had their sons and daughters sent back from the combat zones in a box. There were no hugs, no kisses, no smiles. Children never got to see their mother or father again. Parents lit candles next to the picture of their lost loved one in their military uniform.

On Memorial Day, beyond the beer and the burgers, our freedom came with a cost. We can be grateful to the soldier, who bravely fought for his or her country. But we cannot forget the injured, who carry the scars of their bravery until they die, far from combat. Some, have not been able to cope with the world after being in combat, and they turn to drugs, alcohol or even take their own lives. With all of these soldiers, there are families that have to go on. They share the long-term grief. The soldier is gone. But the family lives on and they hold tight to the memories of a child that smiled and laughed, drew pictures with crayons on the kitchen table, played sports in high school, went to prom, went to college and then went to war - and never came back.

Photos, videos and personal belongings are all that are left of the ones they loved so much. To those families, they may cook hamburgers and drink a few beers on Memorial Day, but they will live the memorial of Memorial Day. They know the cost of freedom - it's the empty chair on this holiday. A big price to pay. We should all salute our soldiers, dead and living. They do and have done things that most of us would not have the courage to do - they fought for freedom. We need to remember and thank them for that, not just on Memorial Day, but every day.

In 1970, Stephen Stills of Crosby, Stills, Nash & Young wrote a song, Find The Cost Of Freedom. It was released as the B side of Neil Young's hit, Ohio, memorializing the Kent State Massacre on May 4th, 1970. (See link below)

On several occasions, CSN&Y or CSN would perform only the haunting chorus of Find The Cost Of Freedom to close out concerts during that turbulent time. Here are the lyrics;

Daylight again, following me to bed
I think about a hundred years ago, how my fathers bled
I think I see a valley, covered with bones in blue
All the brave soldiers that cannot get older been askin' after you
Hear the past a callin', from Ar- -megeddon's side
When everyone's talkin' and noone is listenin', how can we decide?


(Do we) find the cost of freedom, buried in the ground 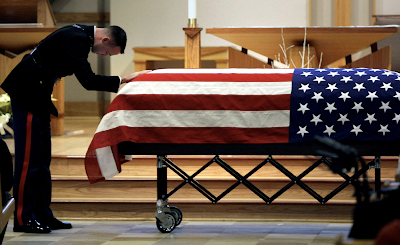 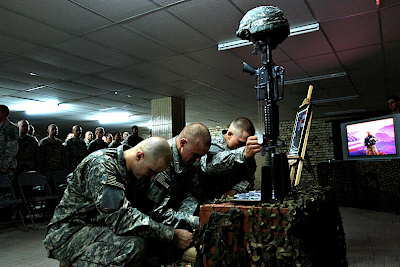 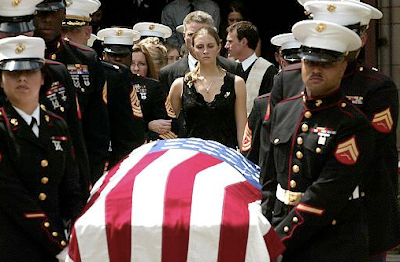 The next time you see a soldier in uniform, thank them. I do it all the time. "Thank you for serving," is all I say. I know that they greatly appreciate it, because they've told me so. It's a good habit to have. That soldier you thank today may not come back from the front alive. He or she may come home in a box, and their family will mourn.

Be thankful that you won't be going to a grave site to place an American Flag on Memorial Day. Be thankful for the freedom you have. Yes, we need a 365 Day Memorial Day, find the cost of freedom. It's priceless.

Related article:
Remembering Kent State Massacre On May 4, 1970 and The Vietnam War