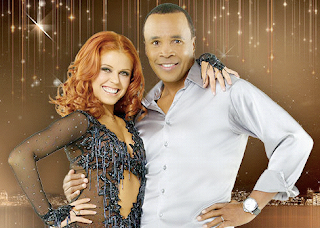 It may have just been a dramatic ploy by the producers of Dancing With The Stars, but the final two couples that were not safe included last night's leader Chelsea Kane. Tension grew as we collectively asked, "Who would be eliminated from Dancing With The Stars 2011?" As it turned out, Sugar Ray Leonard was knocked out and danced his final round.

Sugar Ray Leonard and his partner Anna Trebunsakaya had danced their best dance of the competition on Monday, but it wasn't enough to save the boxing legend.

Fan voting is such a big factor in for the survival of the contestants. Kendra Wilkinson and Louis van Amstel finished in last place on Monday, but they survived to dance another week.

Last season, we saw Bristol Palin carried to the finals, strictly as a result of fervent fan voting.

The three dancers that look like they may be on the edge next week are Chris Jericho, Kendra Wilkinson and Romeo. All of the other dancers have scored well and have enough name recognition to garner sufficient fan voting to keep them in the running.

A bit of controversy is swirling around the DWTS camp. Karina Smirnoff posed nude for the May issue of Playboy Magazine. Entertainment Tonight had a teaser that asked, "Will Karina Smirnoff be fired from Dancing With The Stars for appearing in Playboy?" I never saw what ET had to say. But, honestly, Smirnoff in Playboy is just more free publicity for the show.

Why do you think Donald Trump is talking about running for president? To actually run? NO... he's doing it for the publicity. And his show has the Playmate of the Year as a contestant. Long gone are the days of an appearance in Playboy causing repercussions.

It was sad to see Sugar Ray Leonard eliminated from Dancing With The Stars 2011. He's such a class act and it would have been fun to watch him compete for a few more weeks. But someone had to go, and the fans spoke.