Where Have Our Manners And Values Gone? 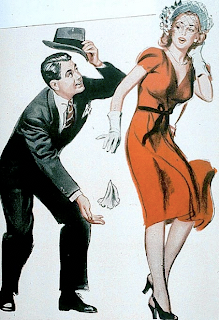 Throughout my lifetime, I have seen a gradual deterioration of public decency. If you're old enough, you've probably noticed this, too. Every day, I have to ask myself, "Where have our manners and values gone?"

I was brought up in an era where men were chivalrous and women were ladylike. There were things that men were expected to do and things that women were never supposed to do. That has all changed.

Nowadays, people do whatever the F*** they want, and they don't seem to care who is around or who could be offended.

I remember when "fart" was considered a taboo word. Now, Jay Leno says it on the Tonight Show. People indiscreetly pass gas in public all the time. They belch, cough and sneeze without covering up and do it all without ever saying, "Excuse me" or "Oooops." It's the norm.

It's not uncommon to sit in a restaurant and hear some fool ripping off an expletive-laced diatribe, loud enough for everyone within 15 feet to hear. And I've heard both men and women cussing up a storm. No one cares.

Growing up, books by Amy Vanderbilt and Emily Post on etiquette were readily available in many homes. There were rules for introductions, courtesy, eating and general public behavior. Now, who cares.

Society as a whole has become more casual. If you look at old photos from the 1940's and 50's, men attended baseball games in suits, ties and hats. Now, you hope the drunken whale next to you keeps his shirt on the whole game.

When you went to a restaurant, it was a big occasion and everyone dressed up. I've seen tourists in Vegas eating in nice restaurants in tank tops with tufts of armpit hair waving at you through the meal. GROSS!

Even a simple act like opening a door for someone has become like a race to see who can get inside first. I still open the door for women and let them go ahead of me. 90% of them never say thank you. I almost want to wait for them to come out and then slam the door in their face.

In my neighborhood, people yell from the back of the store, "Hey, I was in line," and expect you to let them go in front of you.

It's all about ME.

I think advertising has created some of this self-centered attitude. It started around 1999 with McDonald's and the "My McDonald's" campaign. Everyone else jumped on the MY bandwagon. Have it MY way, MY style, MY flavor - and on and on. Now, you can't just buy a pair of jeans off the rack, you can go online and have custom made jeans, made to your measurements - MY jeans.

Starbucks is a perfect example of narcissism in action. Customers come in with these complicated orders: "I'll have a Venti, half caf, half decaf, latte with a caramel squirt and whipped cream on top."

I've seen people demand an exact temperature for their Starbucks concoction. While the barista struggles to get the order right, a giant line is forming behind the princess with her exacting demands. Can't anyone just say, "I'll have a coffee?"

Another trend that surprises me is the lack of personal values. Bad behavior is in vogue. We watch Hollywood's conveyor belt of social misfits on a daily basis - Lindsay Lohan, Brittany Spears, Anna Nicole Smith; and now Charlie Sheen. Coke, hookers, firearms, car crashes - Wow, how cool. Sheen's even selling tickets to showcase his sordid life. Celebrity rehab shows and the freaks from the Jersey Shore are now considered big time entertainment. People want to be like them.

Snooki wrote a book. And it will sell.

Sports athletes get caught with guns, drugs and are arrested for drunk driving. Assault and other serious crimes are also on their resumes.

Tiger Woods looked like a perfect role model of excellence. He traded in golf to be a player and spent his time playing 18 Ho's.

Politician John Edwards was cheating on his wife as she battled cancer. What a low-life.

I'd like to see a day when we say "please" and "thank you" with greater regularity. I'd like to see women given seats on buses and trains by men. And I'd like the woman to be gracious and thank the man. I'd like to see people orderly enter a Wal-Mart on Black Friday, instead of trampling other shoppers to death.

I think people need to learn that the world does not revolve around them. We're not in this for YOUR benefit. We're in this TOGETHER.

Until I see some changes, I'll continue to wonder, "Where have our manners and values gone?"