Telemarketing Scams In Phoenix and Scottsdale, Arizona Are Relentless 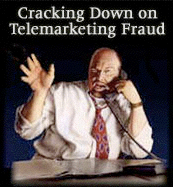 This nightmare started about two years ago. I got a call about making extra money from home from a company called Bankcard Empire. I fell for it. In 2010, Bankcard Empire was busted. Even though the granddaddy of the telemarketing scams in Arizona was shut down, clones of the same business model sprout up like weeds in an unkept yard. Today, telemarketing scams in Phoenix and Scottsdale are relentless and they want your money.

Clone operations are either being run out of the same facilities as Bankcard Empire or offices of its affiliates. They may even be hopping from location to location, but the telemarketing scams are all based in Phoenix or Scottsdale, Arizona. Recently, they have been lying about their location, saying they are from Ft. Collins, Colorado - but the number has a Phoenix area code.

How do I know this? Well, since I was scammed two years ago by Bankcard Empire, I remained on their calling list. Weekly, I have received calls from Phoenix and Scottsdale pitching a new way to make money at home. The opportunities change, but the business model is the same.

NOTE: You need to pass this article on to everyone you know. There are thousands of victims and concerned citizens are the best defense to fighting these scams.

All of the businesses have the same model.

Then, they play a 3 to 5 minute tape "explaining" the opportunity. Most of what is on the tape is hype. It tries to get you to "see" the opportunity and the income potential.

After the tape, a "closer" comes on the line to answer your questions and try to get some money out of you. They'll take whatever they can get. If you balk at forking over $500, then they'll offer you a reduced package for $300. I've heard them drop all the way to $150, just to get something.

Every business includes your very own website! Whooo-hooo. It's a replicated site; which means it is a sub-site off of a main site. You'll never be found anywhere on the Internet, even if you sent out the collective forces of all of the cop shows on TV.

Also part of their package is the promise of a "coach" to help you build your business. In reality, the "coach" is a high-powered telemarketing scam artist who tries to sell you exorbitant "marketing" plans to help build your business. These plans can cost anywhere from $2,000 to $20,000 - again, it's what they can get out of you.

Amazingly, the "marketing" plans never seem to work, so they try to dig into you for more money - "because not all advertising works; there are no guarantees." The only guarantee is that you'll be out a lot of money.

The last two - personal blogs and personal web superstores - I have extensive knowledge about. So I'm especially amused when the bumbling scammer is pitching me and it's obvious he has no idea what he is talking about.

In most cases setting up a blog costs NOTHING. My blog is on the Blogger platform, a division of Google. It's free to set up. If you want your own URL, like www.rogerblazic.com, you'll have to pay a domain service company $10 or less for the web address. Blogger charges no fees for hosting.

I have Google AdSense ads on my site. Those are free too. Just open an account.

There are also a couple banner ads on my site that I got from Commission Junction - FREE. Commission Junction is what is known as a consolidator. They go out and negotiate with hundreds of companies to offer commissions to affiliates. Affiliates are the people who place their ads on their websites - known as publishers. (Like me)

You can find several consolidators - LinkShare and ShareASale are just a few.

The scam artists will tell you all kinds of lies. I've told them that I can get ads on my website for nothing. "What? You mean you're going to go out and negotiate with all of those companies on your own? That could cost you thousands of dollars." Ha... it costs nothing.

Telling you that they'll build a website or blog for you with Google AdSense on it is a crock of shit, too. First off, if Google is going to pay you, YOU have to open the account. It can't be done through a third party. Plus, the scammer will tell you that you'll make 50¢ to $50 per click on the Google ads. Hmmmm... Most Google ads pay in the pennies. It all depends on your keywords. If your site is on a hot topic, you can get clicks that will pay upwards of $10 to $15 - maybe more. But if you like writing about Gothic fingernail art, you'll be lucky to get a penny a click.

As far as the affiliate ads go, they all pay different commissions. A sale must be made for you to get a commission. So if someone clicks on my Best Buy ad and they buy a stereo off of the Best Buy site, I'd typically get a 2.5% commission on the sale. Commissions vary by vendor. There are some vendors that pay as much as 25% or more on a sale, but these are usually very big ticket items that don't sell very frequently - hence the big commission (finders fee).

These clone operations come and go. I've been pitched the exact same scam but the company name is different. It's funny how the audio tape is the same, but there is the new company name and a different price plan.

I don't know how I got on the original calling list, but it looks like I'll be on it forever.

You may have friends or relative that have found themselves on this list. I guarantee they are still being harassed today.

NOTE: You need to pass this article on to everyone you know. There are thousands of victims and concerned citizens are the best defense to fighting these scams.

Daily, the buzzing phone rooms in central Arizona are working hard to steal your money. Knowledge is the key to safety. Tell others what is going on, because the telemarketing scams in Phoenix and Scottsdale, Arizona are relentless.

If you know someone who was scammed, you can call or email the agencies below.

How To Protect Yourself Against Telephone Scams | Personal and Business