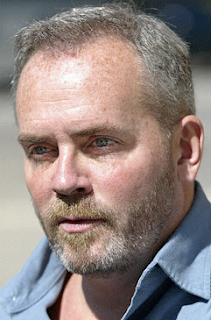 After surviving a brutal first week, the luck ran out for Survivor star Richard Hatch and he was fired from Celebrity Apprentice. Gary Busey was on the hot seat again, but he miraculously lived to compete another day.

This week's challenge was for each member of the teams to create a piece of original artwork and decorate a baseball cap. All artwork would be sold and the proceeds donated to charity. John Rich was the project manager for the men's team (Backbone) and Marlee Matlin lead the women's team (ASAP).

Just as the competition was getting started, Jose Conseco met with Donald Trump. Conseco's father has been battling cancer and his health has taken a turn for the worse. Conseco asked to leave the show. And it looks like he will be gone for the remainder of the season.

Each team went to an art supply store to purchase paints and canvasses for their projects. When they returned to their studios, Meatloaf thought that Gary Busey had taken his supplies. Meatloaf went berserk and unleashed an expletive packed blasting on Busey. He even threatened, "You're gonna wind up in a hospital in about four minutes." Gary wandered around in his usual stupor and didn't seem to understand what was going on. Eventually, Meatloaf's supplies were found in a corner - so he went nuts for nothing. John Rich did a good job of keeping the peace and getting his team back on track.

To me, one of the funniest parts of the show was when Marlee Matlin was signing what their objective was. It looked like she said, "We want to make a shitload of money for our charity." Producers put a fuzzy disc over her mouth, but they also put fuzzy discs on each of her hands. This was a great missed educational moment. I want to know how to sign, shitload.

After losing for three weeks in a row, the pressure was on the women. Late in the show, it looked like the women would falter again. They were running late and arrived at their art gallery with less than 15 minutes to go before the opening. But they quickly got it together and started pumping for the donations.

All of the paintings sold for both teams. A signature Apprentice guitar, autographed by John Rich, brought in a donation of $470,000. But the women worked their contacts like a well-oiled machine.

In the end, the men collected over $600,000, while the women came in just $14,000 short of $1 million. Trump threw in the $14,000 so that the total hit the million dollar mark. Between the two teams, this was the largest amount of money raised for charity ever on Celebrity Apprentice, even for an entire season.

With the women winning, someone had to be fired on the men's team.

All of the men pointed at Gary Busey as the weakest link, mainly due to his lack of focus. Richard Hatch, however, generated the least amount of money for the charity.

This is where Trump made a move that, I think, was strictly for the ratings. Gary Busey is a nutcase, but he's hilarious. Every show he's talking about rainbows and other strange cosmic energy. He seems to look at every word in the English language as some sort of acronym - they're goofy, and worth watching. Even though all of the men felt that Busey was their greatest liability, Hatch became the victim because he was the lowest impact to the ratings. So, Survivor star, Richard Hatch, was fired from Celebrity Apprentice.

Speculation on April 10th Show: Celebrity Apprentice 2011 | Who Will Be Fired April 10th?