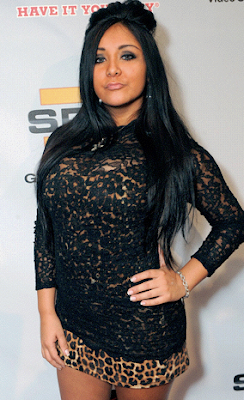 Entertainment Weekly reported today that the cast members of MTV's Jersey Shore Reality Show finalized negotiations for their upcoming season. Each of the "core cast" will receive $100,000 per episode. They've come a long way from the original $5,000 an episode they earned for the first season.

Life isn't too bad for the role models from the Jersey Shore. They'll pull in over a million dollars each for the 13 episode season, plus they'll rake in money for endorsements and other ventures they have cooking. The Situation was reported to have made over $5 Million last year.

Snooki was recently paid $35,000 to speak at Rutgers University. I wonder if she had a Powerpoint presentation and hand-outs? And to think I dropped out of college.

In addition to the piles of cash, the cast will be jetted to Italy where they will film the next season. Life's a bitch. And people told me that debauchery didn't pay.

One of the most laughable side projects produced by the Jersey Shore cast is Snooki's book - A Shore Thing. She worked with a co-author who knew English and could spell.

Snooki also has a fashion line. I think she's sticking with accessories because no one in their right mind would want to dress like her. Unless of course, you were from the Jersey Shore. There, I guess it's normal. Kinda like those European guys at the Vegas pools with the mini-Speedo suits and all the groin hair busting out around the edges.

All of these side ventures are part of the new business model in Hollywood and the music industry - becoming a Mogul.

You get a hit show, hit movie or a hit record and the next thing you know you have a clothing line, dishes at Target, a book deal, your own signature underwear. Cocktails will be named after you and you'll lend your image to a chain of barbecue restaurants. You endorse condoms for cash, pretend to ski so you can slide down a slope of cash and hug animals at the zoo to show how good a person you are.

Yes, being a Mogul has become almost formulaic. PR and business managers hover around you and figure out new ways to milk the public for every buck they can while your star is still shining. If you are properly Mogulized, you'll be set for life. In addition, you'll be so type cast that you'll never work again.

Everyone is an entrepreneur these days. And the drunken, schmushing gang from MTV's Jersey Shore Reality Show are leading the charge after getting their huge raises.