I Have To Run To The Bathroom Real Quick. I'll Be Right Back 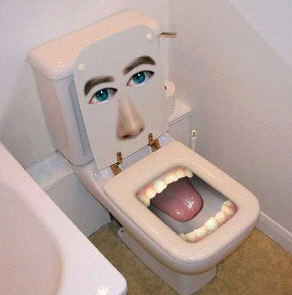 In all of my years, I've never seen anyone make that statement and then sprint off to the restroom, bathroom or latrine. People have to "Run up to the store" too. But they get in their car and go. Maybe all this faux running is why Americans are so fat. If they really ran anywhere, you'd think they'd be thinner.

When people actually RUN to the bathroom in a mad dash, they never announce it. They're usually running because their brain sensed a sudden, imminent breakdown in their sphincter muscle. Their mind just screamed, "Holy crap! This ain't gas... RUN!" An imaginary gun goes off and they make a mad dash for the nearest facility.

This "dash" can also be done as a hurried waddle, with your butt cheeks slammed together tight enough to crack walnuts. Failure to make the finish line is followed by, "I have to run home real quick."

The second part of that statement, "I'll be right back" only applies to men and never to women.

When a guy says, "I'll be right back" he usually is. Guys run to the bathroom, do their business - BTW only about half wash their hands - and they're back. "That was quick," is a common remark after a guy goes to the bathroom.

Women, on the other hand, lie when they say, "I'll be right back." I've had women spend so much time in the bathroom I felt like I had been ditched.

Women do a lot of extra stuff in the bathroom, too. I've seen women return from the powder room with freshly applied makeup, a new hairdo and a different dress. "WTF happened in there?"

This whole "run to the bathroom" ruse perplexes me.

I don't know how you can say, "I have to run to the bathroom," if you have an overly distended bladder. That is painful. You can barely crawl if you've reached the absolute maximum allowable limit.

I remember an extremely painful experience with a full bladder.

My car battery had died at a rest stop somewhere west of the Ohio border along I-70. I was coming home from one of my stand-up comedy gigs out west. It was January and snowing. The roads were treacherous.

I managed to get a jump for my battery and the car was running fine. But I knew that the only thing keeping me going was the alternator. That old battery wasn't going to hold a charge for more than five seconds, which meant I couldn't turn the car off until I got home. No stopping.

Around Columbus, Oh, I started to feel the urge to pee. But I couldn't stop. As I turned north on to I-71 to head to Cleveland a sharp pain shot into my side. I was getting desperate, but I had almost two hours of driving through snow ahead of me. What should I do?

Cruising along the interstate, I started to look around my car for some kind of a container. Nothing. Pain stabbed me again. I winced. Then, my mind started to come up with crazy solutions. "Was there a way to partially open the door and pee out on the road as I was driving?" "What about the ash tray?" "A shoe?" Oh, did it hurt.

I began to bang my legs together. I put my car on ghetto cruise control. My car didn't actually have cruise control. I would jam a snow brush between the gas pedal and the seat. Lean to the right, go faster; lean to the left, go slower. By banging my legs and knees together, my car was surging forward and then slowing down. I didn't feel like it was safe to extend my leg to reach the gas pedal.

The pain was so great, I needed to do something. I pulled into a rest area. But I couldn't leave my car without leaving it running. That, I knew, was a dumb idea. So I sat in the rest area for a minute or two, watching the people coming and going from the restrooms. I imagined myself peeing. This only made the situation worse.

I thought of stopping on the side of the road, which I had done many times before. But because of the snow, I risked getting hit by hundreds of pounds of snow being launched by the steady stream of snow trucks working to clear the interstate.

Now, my vision was being effected. As the wipers swept fluffy white flakes from my view, I thought I saw a camel. At one point, the snow covered road looked like one giant white urinal. I had to get to my goal.

At that point, my bladder felt like a pumped up body builder. I felt like it was growing muscles that were not even humanly possible.

By the time I hit the Cleveland area, I was about ready to pass out. I had squirmed over every inch of my front seat. My legs were clamped together so tight I thought my penis would be flat for the rest of my life.

Finally, I turned on to my street. I already had my zipper down and was ready to fire. I thought I'd never make it the last couple hundred yards.

I carefully turned into my driveway, trying not to bump onto the grade.

When I got near my garage, I slammed the car in park. I slowly slid out of the car, stood perfectly erect and let out a blast that must have gone thirty feet. For nearly five solid minutes I "Ohhh'd and Ahhh'd" until I was completely drained. I almost collapsed when it was all over.

I had to run to the bathroom. Ha. It was a race for my life.

I had to pee twice while writing this article. No drama. Thank God. But what does it mean when it burns? I'll be right back.


Related article: How To Escape After Farting In Public