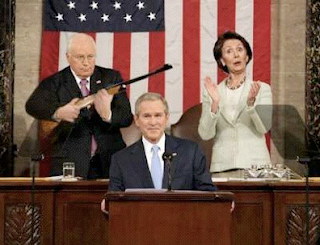 Now that we've had some time getting used to the messiah in the White House, Barack Obama, I wanted to take a look back at the previous Bush years. And I've come to the conclusion that George W. Bush and the Republicans just loved playing war.

Face it, W. was raised in Texas. He rode horses, shot guns and cleared brush. He was a real American cowboy in the mold of John Wayne. At least I think he thought he was in the mold of the Duke.

You start a stink with a Texan and there's an ass-whoopin' in your future. And it doesn't matter who gets the beating, anybody will do.

I think W., Dick Cheney and some of the Republican leaders went down to the war room in the Pentagon and said, "Damn, ain't shit happenin' here." Their eyes ran up and down the giant global strategy map as if they were checking out a sprawling train set. "We need to get this thing running."

Then September 11th happened. Bush, Cheney and the chiefs of staff rushed to the war room to see if anything was lighting up and if they could get that steam locomotive to pull fifty cars filled with items we imported from China.

September 11th was a gift to the Bush White House and it needed an ass-whoopin' in response. Osama Bin Laden popped up on Bush's XBOX Flight Simulator and he yelled at Dick Cheney, "Look at that crazy bastard. We gotta get him. He's probably worth a thousand points or more." So, in 2001, we sent troops to Afghanistan.

As Bush maneuvered troops through Taliban, penguins and gold coins, the search for Osama dragged on. "Dick, this game is getting boring."

"Just be patient, George. Have another peanut butter sandwich; and maybe tomorrow we can let you raise the flag on the roof of the White House."

As Bush tired of the Afghan war, he told his intelligence to look for new foes. They came back with WMD's. Bush said, "WMD? What do Wicked Menstruating Dykes have to do with us fightin' somebody?"

"No, sir, WMD stands for Weapons of Mass Destruction."

Pausing, Bush asked his advisors,"So, who we gonna fight?"

"That's right sir. The CIA has given us intelligence reports that Saddam does, in fact, have WMD's."

"No shit. Well, we gotta do what Americans do and go kick his ass."

"But, Mr. President, we'll need the approval of Congress."

"That'll be a snap. Look how we plowed through the whole Afghan thing. This shouldn't be too hard if we get the right intelligence to convince them. Quick, get a Powerpoint presentation together, hand-outs and goodie bags with autographed pictures of Saddam Hussein. Put a sample of the Iraqi food in the goodie bags and everyone in Congress will know that we can not only save them from WMD's, but that gross shit they eat every day. If this goes right, we'll have a McDonald's and a Starbucks on every corner in Iraq."

Cheney asked, "What should we do about Afghanistan, sir?"

"Yeah, those inner city kids get too violent on crack and meth. When they're on heroin, they just lay around. Then we can cut funding for police since they won't have to run around with Taser's zapping crack heads. Heroin will slow down crime, especially if it is cheap."

Congress bought the presentation on the WMD's and they really enjoyed the goodie bags. In 2003, we started bombing Iraq. Bush and the boys ran to the war room.

"Look at that shit lighting up. Now, this is what we're talkin' about. I hope you boys all bought stock in Haliburton, General Dynamics and those other defense contractors. We're gonna get rich."

So, George W. sat back and played war on two fronts. He was scoring a lot more points in Iraq and then he hit the jackpot, "We got Sa-Damn! We got that bastard." 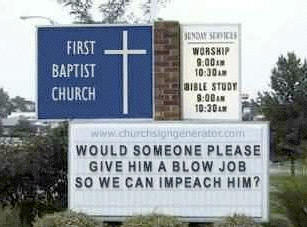 "Yes, sir, a real victory for America and its military."

"Talk is that those Iraqi's are gonna hang the bastard. Can we get Fox to run that on a pay-per-view deal?"

"Damn, that would've been a helluva show to watch. Oh well."

A few years later, the war in Iraq was not on course.

"Sir, we came up with a new strategy, The Surge."

"Well, sir, we go to the war room and press the ADD TROOPS button on the drop down menu."

By the time the Bush presidency was winding down, the Afghan war was still looking for Osama Bin Laden, thousands had died in Iraq and they were trying to rig elections.

It's a good thing that George W. didn't get elected for a third term. He was itching for a new war.

Right before Bush left the White House intelligence showed that the U.S. was being attacked by aliens.

"Damnit, Dick, we're being attacked by aliens. Alert NASA and see if we can dust off Reagan's Star Wars shit. We need to kick some alien asses. Do we have any other intelligence on them?"

"Yes, sir. It appears the aliens are coming from Mexico."

"Yes, sir, and they are led by El Quesadilla."

"Not, El Quesadilla! He's worse than Bin Laden and Hussein combined. I hear he's trying to smuggle LSD laced tortillas into America, is that right?"

"Yes, sir, the infamous LSDLT. We can't let him get the LSDLT's into the country. They might wind up on the Value Menu at Taco Bell, and then what are we going to do? This is a biological weapon of the greatest magnitude. What should we do?"

"Well, Dick, sadly we can't do crap. That damn Democratic messiah is kickin' McCain's ass and I don't think this Obama character cares about war the way we do. So we gotta sit back on our guns and move on."

"Yes it is, Dick. But the American people know that George W. Bush and the Republicans were not afraid to pass out an ass-whoopin' when it was needed. And for that, we can all sleep better."