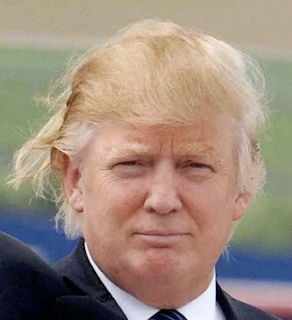 NBC News reported this evening that Donald Trump for President was gaining in the polls due to his questioning of Barack Obama's Birth Certificate. I thought we covered this already.

First the poll results, then we'll get to the birth certificate.

NBC News polled likely Republican voters on who they would vote for in the 2012 election. A month ago, Mitt Romney was in the lead and Mike Huckabee was second. In 30 days, Donald Trump has bumped Huckabee out of the second spot and he's right behind Romney. Romney had 20% support, Trump had 17% support.

NBC News said that Trump's rapid rise in the polls was due to Tea Party support and his questioning of Barack Obama's Birth Certificate.

A rumor was first circulated during the 2008 campaign that Obama was not born on U.S. soil, which would make him ineligible to be president. A number of lawsuits have been filed to produce the original birth certificate. All have been thrown out of court.

Snopes.com has a detailed explanation regarding the Obama birth certificate.

Supposedly, a real birth certificate was produced and it was verified that Barack Hussein Obama was born in Honolulu, Hawaii. But some dispute the proof.

Trump was quoted by NBC News as saying, "He's spent over $2 million dollars trying to cover this up. If it was me and there wasn't a problem, I'd just come clean. However, if Obama was not born a U.S. citizen, this would be the biggest scam in history."

Personally, I find it hard to believe that Obama spent $2 million on a cover-up. Where would he get that kind of jack? He makes $400K+ as president. He didn't spend enough time in Congress to amass any kind of wealth and he was a low-paid social worker before that. As far as I know, his family doesn't have any assets to use as collateral for a hefty defense.

Could Donald Trump be lying?

Maybe. The Trumpster has a knack for making news. He's a media magnet. When Trump talks, there are usually microphones and cameras present.

He could have said, "I saw Barack Obama bend over and kiss his own ass." And the media would report that, unquestioned.

What Trump has going for him is that most people think with their hearts and not with their heads. Emotions go a long way in political debates. Insane ideas can suddenly make sense - look up Adolph Hitler.

Whether there is any meat to this birth certificate conundrum, the fact is Donald Trump is climbing the pollster ladder. Only time will tell if he will actually run. And if he does, could he win?

I'd like to see him win. I'll tell you why. It would be the greatest television moment in history to have Donald Trump say to Barack Obama at the end of election day 2012, "You're Fired."

I'd laugh for four years until we came to our senses and put someone else in the White House.