Dancing With The Stars 2011 | Did Wendy Williams Dance Her Last Dance? 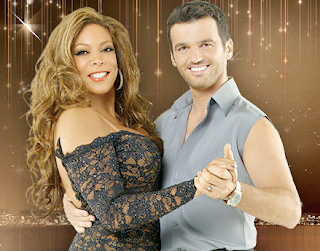 Week three of Dancing With The Stars showcased graceful moves by the leaders and clunky strutting by the laggards. One couple even recovered after a fall. However, after finishing at the bottom of the leader board with 15 points out of 30, did Wendy Williams dance her last dance?

Only Wendy Williams' fans can save her now. For three of the performance shows she has been at or near the bottom of the leader board. But loyal fans of her TV and radio shows could keep her dancing for another week.

Near perfect performances by Hines Ward and Petra Nemcova, kept them atop the leader board. Both look like they are providing stiff competition for Ralph Macchio, leader of the first performance show.

Kirstie Alley avoided total disaster when her partner, Maksim Chmerkovskiy fell just as their dance began. Chmerkovskiy said his leg muscle froze up on him. Unfettered by the mishap, they recovered quickly and finished in beautiful style - gaining kudos from the judges and good scores, despite the fall.

As I've said all along, Wendy Williams' fans could keep her in the competition and send a more accomplished dancer home. We'll all find out Tuesday night if Wendy Williams danced her last dance on Dancing With The Stars.

Next Elimination: Dancing With The Stars 2011 Says Goodbye To Wendy Williams