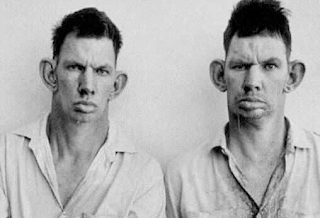 The biggest problem with nuclear waste is that it remains dangerous, basically, forever.

To help explain this phenomenon more clearly, I'd like to call on our two southern nuclear correspondents - Bubba and Lester.

"Yeah, you got more crack showin' than on the corner of Martin Luther King Boulevard."

"Shut yo mouth Lester. Keep it up and I'll talk shit about yer Mama."

"Oh, don't even go there Bubba. Besides, we's 'posed to be talking about new-culer waste."

"Bubba, do you know dick about new-culer waste?"

"Now, Bubba, this dog will be good to your family and make everybody happy. He'll light up your life."

"Damn, Lester, you sure you wanna give up a dog like dat?"

"Jes shut up and listen to the story."

"So yooz got this dog that you and your whole family love. Been lightin' you up for a long time. Then one day, this dog is gonna take a big ole shit in your yard."

"Well, Bubba, this pile of shit is gonna kill all yer grass."

"No more freakin' mowin'. I like this damn dog."

"But then the pile of dog shit kills yer chickens and your hogs."

"And after that...   that there single pile of dog shit will kill your whole family."

"Lester, what the fuck you feedin' that dog?"

"Do you buy that at Piggly Wiggly?"

"No, only the government can get it."

"So my dog's gonna be on welfare?"

"No, dumbass. Your dog is gonna have a glow-in-the dark asshole."

"No, his shit is dangerous."

"Sounds like it. I can do without the wife and kids, but I don't know what I'd do without my hogs. Maybe I should get my pooper scooper from Wal-Mart and shovel that shit up."

"Nice try, Bubba, but that dog shit seeps into the ground and you can't get rid of it."

"Not even with lime? I get rid of all kinds of dead shit with lime."

"Nope. Lime won't work. That shit is gonna be there forever and ever."

"Then, I guess I better move."

"Too late. When you go to shovel it up, it will kill you too. In fact, it will kill everybody in town, includin' all our buddies at One-eyed Jakes."

"Damn, that's some nasty shit. You sure that dog ain't got worms?"

"No, dumbass. He ain't get worms. Yoo gots to understand that this here Rad-eee-o-ak-tiv-ity is some nasty shit."

"You got that shit right."

"To be honest with ya Lester. You can keep your ass-glowin' dog and give me a cat."

"If we can get the world thinkin' like that, we won't have no deadly shit in our yards."

"Yep. And I'll take yer wife off your hands."

"Damn, you is a good friend. Thanks."


Now, I think you have a better idea of what is at stake if we continue to rely on nuclear power.

I don't know what the alternatives are, but we need to throw all of our efforts into renewable energy. Because a serious nuclear disaster could be more devastating than dropping a hundred nuclear bombs somewhere on the planet. We could permanently contaminate our land, air and sea. And that won't leave much left for the human race.

Americans Can Learn A Few Things From Japanese Culture