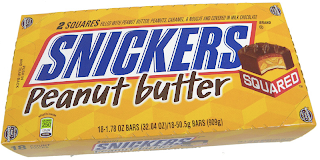 There is a fine line some advertising agencies walk when they produce "edgy" commercials. Some are hits, while others are completely offensive. Recently, there have been two ad campaigns that have used sharks in their commercials. In both cases, I think the ad guys need to go. The Snickers Peanut Butter Squared ad is just wrong - Nicorette, too.

This ad features a focus group of sharks sitting around a table discussing how much they liked the taste of Snickers Peanut Butter Squared candies. The commercial implies that the sharks are tasting the candy by eating humans. To wrap up the commercial, the sharks want another taste of the Snickers candy and a young man is brought into the room.

I'm from the generation that grew up with the movie JAWS. I've also had over 20 years of "Shark Week" on the Discovery Channel.

When I think of sharks and people, I think of gaping wounds, missing limbs, lots and lots of blood. None of the images are remotely settling or related to candy.

Sure, a focus group comprised of sharks is kinda funny. But the implied "eating" of the candy consumer is just sick.

When the young man is brought back into the room, you'd expect him to have an arm missing or a gaping hole in his torso or half a head. But he's in perfect condition. I don't get it.

If you haven't seen the commercial, here it is.

Maybe it's just me, but I'm failing to see the funny here. And this ad does nothing to pique my interest in Snickers Peanut Butter Squared candies.

A while ago, Nicorette nicotine gum was running an ad that also featured a shark. This ad completely confused me. It ran for several months, then a new campaign emerged.

This ad shows a man sitting on a bench on a pier. The announcer says quitting smoking sucks. Suddenly, a shark leaps out of the water and latches onto the man's arm. His arm is completely in the shark's mouth and down its throat. The man acts as if nothing is out of the ordinary. Then he pops a Nicorette gum into his mouth and instantly he realizes he has a shark on his arm and starts freaking out. And the message was?

Let me guess. When you are suffering a nicotine craving, you can be run over by a bus and you won't notice it. You are in a complete trance and are divested of reality. But Nicorette is there to jerk you back into reality. Suddenly, the nicotine cravings that didn't seem to be bothering you are overtaken by the freakin' shark on your arm. Am I missing something here?

A group of guys with black fingernails and spiked hair back at the ad agency were probably howling when they put that spot together. I don't know if the rest of the public reacted the way I did, but it kinda creeped me out. The visual implies imminent death. That imagery would make me want to take up smoking, and coke snorting and Xanex abuse.

Here's the commercial. You be the judge.

Sorry, I guess I missed the point.

There are so many really great, funny commercials out there. The KIA hamsters cruisin' in the KIA Soul comes to mind. Hamsters are cute. Making them hip-hop dudes is funny. Sharks chomping up people is scary as hell. I don't think that was the emotional response the ad agencies were trying to accomplish.