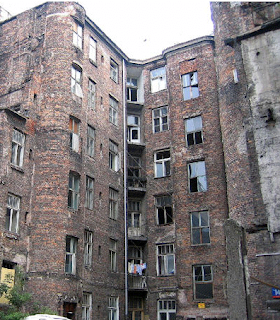 For the last 24 hours, I have been writing and writing. My mind races so fast, I could not fall asleep. So, I've been up all night. At 5:10 am I decided to go to Dunkin Donuts, my favorite wifi hook-up. After working on an article for about an hour, I decided to step outside for a smoke break. Little did I know that I was about to go on an adventure in da hood and I'd be driving Mr. Mike.

It was still dark outside and the air was damp. Off to my right emerges a very dark skinned black man with a thin mustache in a tan suit. He was panting as if he'd just run a marathon. He started waving his arms as if he couldn't speak. Between gulps of air, he asked, "Can I git a smoke from ya?" I obliged, but told him to catch his breath first.

I asked him, "Do you need a light?" He nodded, still gasping for air. Then he stuck out his hand and said, "I'm Mike."

Without asking any further questions, Mike started to slowly spit out some sentences, "Da bitch threw my ass out."

"Yah. Da bitch just told me to get the fuck out the car or she'd call the po-leese. I can't go to jail. I gots to get to werk."

"Where did she throw you out?"

"Just down the street. I got a bag hidden over there with my stuff."

"I'm still not sure where your stuff is."

Mike was still breathing heavy. "Damn bitch started trippin' because I talked to a woman I used to go wit. Then she went straight up crazy. She was gonna call the po-leese. I can't do that shit today. I'm 53 and I jes can't take it."

"I need a ride down to Euclid and Superior." He whipped open his jacket and stated, "I ain't no robber. Ain't got no guns. Yoo OK."

"Down there where it is."

I still had no idea where he needed to go.

I thought to myself, he seems harmless and I'm always game for a new story, so I agreed to take him to this place on Superior.

I went back into Dunkin Donuts and packed up my laptop and headed out to my truck. "Follow me," I told him.

We both got in my truck. Mike panted, "Deez wimen are all messed up. O.J. screwed it up for all of us. They get mad and dey call the po-leese. Fuckin' O.J. Messed up EVerything.

I started the truck and began pulling away when I suddenly realized that we forgot to get his bag. "Mike, where is your bag?"

"Go dis way," as he waved his arms in more than one direction.

"Next to the Key Bank. Jes go down an I tell yoo wheres to turn."

So we headed west on Lake Shore Boulevard about half a block.

So I pulled a hard left, heading for the driveway of the bank."

Now, I'm on the wrong side of the street, heading into oncoming traffic. I punched it and made a bat-turn onto the side street.

Not having a clue as to where we were headed, I just stopped."

He jumped out of my truck and ran over to the side of the bank building. In the bushes, he pulled out a large multi-colored shopping bag. He raced over to my truck, opened the back door and threw the bag in, dumping its contents all over the back seat and onto the floor.

Mike had dropped a few things along the way, so he had to run back and gather those items up before he got back in my truck.

"Jes drive to dat house and pull in the driveway."

So I pulled in the driveway of the next house on the right.

Mike rushed over to the bushes and fished out a black topcoat and a sharp looking velvet hat.

By now, he was out of breath again.

"How do ya like dat? A four hundred dolla hat. Oh, that's a story too. I gots another bitch gonna be mad 'bout this hat."

I cut right to the chase, "So, Mike, where are we going?"

I wasn't exactly sure where that was, but I had a route in mind. I was going to head straight up the street we were on, turn right and go down to Superior. My guess was that it should take about 15 minutes. But Mike urged me to get on the freeway.

Now, I started thinking that he wanted to go all the way near downtown and the Superior exit. I asked him if that was correct. He said yes. We had about 20 minutes of diving to get to the exit. Our conversation meandered around until I started talking about my medications and why I'm not working. He started telling me about his medications. Great, two nut cases in a truck in the dark.

"Sure." We both lit up my last two cigarettes.

One thing you can always count on with inner-city black people is they know "The System" and they're proud to talk about how to work it. By the time we got to the Superior exit, Mike had explained to me how to get food, housing, medical, under the table cash, free cable and some other stuff.

We got off on the Superior exit and wound up in the wrong lane. Mike wanted me to go left and I was in the "go straight" lane. So, another bat-turn and we were headed west on Superior.

Mike was telling me how he spent $50 on this woman at the dollar store, and she wasn't happy. I said, "I know what you mean. Black women loves their makeup."

He laughed, "Yoo a silly man."

"And black women don't always come with their own hair."

"Yeah, my last girlfriend was black, and a crack whore."

"Yeah, she was spending all my money on hair. My closet looked like it was full of pelts."

After a couple miles, I asked Mike were we were headed.

"Yoo can miss it. It'll be all lit up." He paused, "Man, can't believe that bitch went straight up on me. I don't want to mess with dat. Then you gots to post bond. She starts all dat DV on me (Domestic Violence). I don't hits no wimens. Can't do dat. O.J. messed it all up for us. He damn sure did."

Still not knowing where we were heading, I kept on driving. We drove through some of the most run-down, boarded up, nasty looking neighborhoods in town. Every time a light turned yellow, Mike would coax me, "Yoo can make it. Yoo can make it."

I didn't want to take any chances. In that neighborhood, you know the po-leese are nearby and you never know who's watching.

"Mike, where is this gas station?"

"Yoo gittin' dare. I got ya covered."

We had started at E. 33rd St. and were currently at E. 83rd St. If we had gone my way, we'd have been there 15 minutes ago - even though I still didn't know where we were going.

Finally, Mike started to get more specific about his directions. "You see dat green light down dare?"

What's sitting next to me, a telescope?

After another mile or so, Mike pipes up, "Yoo see dat bridge. It's right pass da bridge."

YES! We were closing in. I could finally see the Shell sign, just beyond the bridge.

When we got to the Shell station at E. 115th St., Mike yells, "Turn in the station right here."

"Now, cuts through da station and go in front of dat 'partmen building."

So I pull out of the gas station and park in front of an apartment building. Mike said a friend of his lived there. Mike jumped out of my truck and went to a first floor window and started knocking on it. After a couple minutes, he failed to rouse anyone and returned to the truck. "I got a woman 'round da corner. She mad at me too, but I think I can stay dare. Goes to da light and turn leff."

I drove as instructed. Mike started his counting game again, "It's the one, two, three, four, yeah, fourth street on the right."

I made the turn as instructed.

We proceeded down a street of boarded up and disheveled homes. Mike said, "Goes to where dat truck is in da drive."

I keep going down the street toward the house with the truck in the drive. All of a sudden, Mike yells, "STOP!" A quick pause and he tells me, "Dis is it."

He went to the front door of this house and it only took a couple minutes for him to get his lady friend to answer the door. Mike rushed back to my truck and started grabbing armfuls of his stuff. I helped him. Here, I thought he'd have clothes and a few personal effects, since he said he just got thrown out of the bitch's house. But everything was stuff from the dollar store. Shampoo, lots of bottles of cocoa butter lotion, facial tissues, AXE deodorant and some other bottles of oils and lotions.

We managed to fish all the stuff from under the seats and off the floor. Mike was completely unpacked. He said thank you and headed into the house.

He never paid me for my time. So I was out two cigarettes and by the time I got home, three gallons of gas.

It took over 45 minutes to get to where we were going. I could tell Mike didn't drive much. (His license was suspended.) It took me 20 minutes to get back to Dunkin Donuts and that included a stop for gas.

Oh well. I got what I signed up for - an adventure in da hood - driving Mr. Mike.

Living In A Black Neighborhood Takes Some Adjusting
Are Black People Afraid Of White People?
I NEED WEED !!!!