Unemployed | What If I Told The TRUTH On A Job Interview

I'm unemployed. The Recovery has not found me yet. Most of the problem is my own. I've managed to live over 50 years and never developed one marketable skill. My resume is a kaleidoscope of experiences, but they don't add up to anything that would get me a job. Here's what would happen if I told the truth on a job interview. 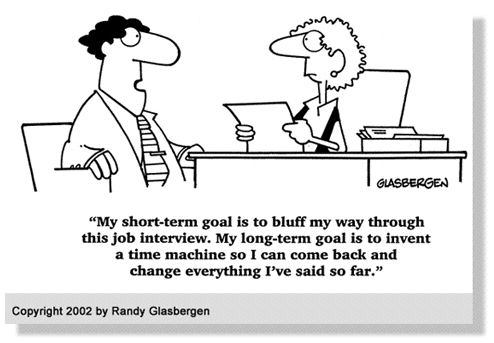 For this exercise, I'm going to create a mock interview with an interviewer at an employment agency. ALL of my answers will be the truth. Questions and answers by the interviewer will be sarcastic fabrications.

"Well Mr. Blazic, how are you today?"

"Just busier than hell. We've had over 400 people come in this week and we haven't found a job for a single one of them."

"What are my chances of finding a job?"

"Well, Mr. Blazic, that all depends on your qualifications. I have to mention that you're dressed rather casually for an interview. I mean, a T-shirt, jeans and tennis shoes?"

"Sorry, these are the only clothes I own. I have three outfits that all look the same."

"Hmmmmm... we'll you're set if we can find you a job at a place that has Casual Friday...  We may, however, have some problems with the rest of the week. We can work on that. Let's continue. Are you working now?"

"When was the last time you worked?"

"Why did you become unemployed?"

"I was suffering from mental illness."

"OK, so you can add, you have two polar bears - huh, you must like animals - and you have anxiety. Hey, did you ever see that Mel Brooks movie High Anxiety?"

"Laughed my ass off at that one."

"I also spent some time in a psychiatric hospital."

"Oh, that movie One Flew Over The Cuckoos Nest was a gut buster. I love Nicholson. Was your nut house like that?"

"Kinda. But we didn't have an Indian."

"Well, Mr. Blazic, so far, the traits you have may fit in well in an office environment. Employers are looking for people that are a bit edgy. Plus, you'll be great for office gossip. Now tell me the last place you worked."

"I worked at an Oreck Vacuum Cleaner store in Las Vegas."

"I sold, assembled and repaired vacuums."

"I bet that job sucked... Oh, my... I just crack myself up sometimes. Why did you leave that job?"

"But I thought you loved pets. You got those bears."

"No sir, I'm allergic to cats and the vacuums were full of cat hair and cat dander. I developed respiratory problems, and then I had a mental meltdown."

"Boy, Oh, Boy. You could be a reactor in Japan, the way you're talking... How long were you there?"

"So you have retail experience. None of the stores at the mall are hiring. And if they do, they want young cute girls. How do you look in a short skirt? ... Ah, never mind. What did you do before that Oreck job? ... Oh, is that Barry Oreck guy still alive?"

"His name is David Oreck and he's still alive."

"I believe so. What was your next question?"

"Oh yeah, What did you do before the Oreck job?"

"I worked as a lead generator for a timeshare company at Planet Hollywood."

"Planet Hollywood? Did you ever meet Arnold, the governator? Wasn't he in on that?"

"So you were slingin' timeshares? What a whores business that is. What the hell did you do?"

"I was part of a unique experiment. We boarded the shuttle buses at the airport that took the tourists to the hotels and we gave a presentation on the bus. Our goal was to sell them discount show tickets in exchange for taking a tour of the timeshare."

"Wow, talk about a sucky job. Was there any money in it?"

"No, that's why I left after only three months."

"Three months, jeez, you can't keep a job. But the bus thing may have some potential. Do you think you'd make a good tour guide?"

"Well, none of those jobs exist in Cleveland. Our tourism is primarily driven by people stopping to use the bathroom or get gas. Maybe if we ever get those casinos built, we could help you get a job there. So what did you do before the bus job?"

"For six months I tried to start an Internet based business."

"There ya go with that Vegas shit. You're letting it stay in Vegas. I got ya [wink]"

"Yes, I tried really hard to get some kind of income developed from the Internet, but I just couldn't do it."

"No wonder you took that bus job. However, having experience with the Internet could be very valuable. Were you ever on Facebook?"

"Cool. Do you post pictures of hot chicks on there? That's what I do."

"You're a blogger. Hey, it's a lot better than being a clogger. You ever seen those crazy chicks in West Virginia? They're nuts."

"Do you have any jobs that are Internet related?"

"Well, we do... but you need a degree in communications or marketing. Do you have a degree?"

"No, I did two years of college then dropped out."

"Oooooh... big mistake. About 80% of the employers won't even talk to you if you don't have a degree. Even if the degree was in home economics you'd be better off. Wow... that's a bummer."

"I was trading stocks and stock options with my own money from home. I used complex option strategies. It was really good for a short time, then I started losing money."

"The stock market? Hell, you were already living in Vegas. Wasn't there enough gambling for you there already?"

"I didn't gamble much. Only craps."

"Oh, a dice man. I like the slots. Just push the button and keep ordering drinks."

"Ha... I once saw a sign at the Riviera that said FREE SLOT LESSONS 2 PM."

"Nope. I even have a picture of my brother-in-law standing next to it."

"Really? Maybe I should have taken those lessons. I didn't do very well, but I did get really drunk."

"So you got your ass kicked in the stock market?"

"In the end, yeah. I was trading futures then."

"How long were you gambling on the stock market?"

"Long time. And what did you do before that?"

"I worked for seven weeks at an ad agency."

"It was right after I had a nervous breakdown. I couldn't think and could barely speak. The job was a sales position and it was the wrong job at the wrong time."

"We'll just have to skip over that job and make up some stuff to fill the time on your resume. What did you do before that?

"OK, so you ran a failed business. That's OK. We might be able to work with that. Advertising is a good field. Do you have a degree in communications, advertising or marketing?"

"Hey buddy, you are right and you are on the ball. Employers love that kind of sharpness. How did you get into advertising?"

"Do you know Jay Leno? Hell, that guy is hilarious. Who's your favorite comic?"

"It doesn't really matter. Comedy is subjective. Everybody likes different things. Who's your favorite comic?"

"So you were a comedian? How long did you do that?"

"About nine years. I used to work several of the comedy clubs in Vegas and then tour on the road in the Midwest and East."

"So you're probably a really good speaker?"

"Yes, excellent. I love talking in front of crowds. I'd make a good instructor or product presenter."

"Could you pass out teenie-weenies at the grocery store and make people buy 'em?"

"That's really not the kind of work I'm looking for."

"Well, public speaking is a valuable skill. We could get you a job as an instructor or as a presenter for one of the vocational schools. You know, try to get high school kids to go to the school. You have to do a talk and sell them on the idea of going to the school."

"I'd probably be really good at that. And I'd love a job like that."

"Great. Do you have a degree in education?"

"Haven't we covered this already?"

"Oh, yeah, that's right, you don't have a degree. Well let me key a few things in the computer and see what we come up with."

"That would be great."

"OK, Mr. Blazic, here's what we have. Let me turn the screen so you can see what we're talking about."

"What this program does is charts all of your experiences and then forms a graph. Based on what you've told me, your diverse experiences actually form a Star of David, not a graph. Have you ever thought about being a Rabbi?"

"No, thank you. I'm pretty happy with where I am."

"C'mon, being a Rabbi is a good gig. It pays well. You get to wear one of those hats all the time and some really cool shawls. It only takes about eight years of Rabbinical School. Are you sure you don't want to get more info?"

"Have you ever thought about being a clown?"

"I can make balloon animals. Do you have any openings?"

"No. I was just checking to see how low you'd stoop. Let's see what else the computer has to say."

"OK... the news isn't great, but I may have something. Based on your experience, I have a number of openings in sub-menial jobs."

"Yeah, these are the jobs that even the blacks and Mexicans don't want. They're really popular with women trying to escape the sex slave trade. What do you think?"


I left the building and went home to pee.

I'm still unemployed. That's what would happen if I told the truth on a job interview. In a future post, I'll tell you about a job interview where I lie about everything. Should be fun. And I should still be unemployed.

Follow up:
Unemployed | I Have to LIE On A Job Interview. So I LIED Large.