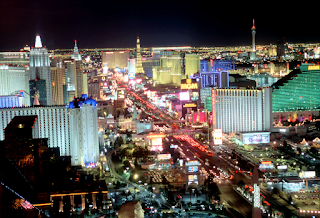 St. Patrick's Day was always a fun day for me in the past. I had to drink up the excitement at an Irish pub and always anticipated the smells and tastes of corned beef simmering on the stove. However, on St. Patrick's Day in 2010, none of the fun or familiar traditions would be honored because this was going to be my last full day in Las Vegas.

In the months and years prior to this fateful day, my life had been on a slow downward spiral. Nothing I tried could reverse the course. Bad luck and bad decisions had decimated everything I had. My fortune had been squandered, my home was in foreclosure, the IRS was hounding me for two years of tax returns, Chase Bank was chasing me for unpaid credit cards, my job was killing me and I had developed severe anxiety disorders.

A month before St. Patrick's Day, my family had decided that I needed to return to Ohio to be close to my sister who could care for me. What was left of my belongings, after numerous garage sales, would be shipped via truck. My vehicle would also be transported to the Buckeye state via truck. My sister flew into Las Vegas a few days before St. Patrick's Day to help with final packing before the movers arrived.

After my belongings and vehicle were dispatched on their journey eastward, my sister and I had one full day left in Las Vegas, the place I had called home for over fourteen years.

In 1995, I was a touring stand-up comic. My circuit covered 28 states, mostly in the East, South and Midwest. I met a woman on the Internet. We had the same birthday and a number of other commonalities. I packed up and moved west from Cleveland, Ohio in late December of 1995. I arrived in Las Vegas on January 1st of 1996. My Internet lady got me connected with Steve Schirripa (Sopranos, Animal Planet and numerous bit parts) who was the entertainment director for the Riviera Comedy Club. Steve put me to work. I worked with some frequency at the Riviera and Maxim Comedy Club; and even did a stint at the Congo Room at the Sahara. I had the same dressing room as the Rat Pack. I was in the soul of Vegas.

In September of 1996, I married my Internet lady. The following year, I went to work in the advertising agency she owned as an account executive and gave up the spotlight. In 2000, we bought new cars, built a beautiful home and had a daughter in October.

Following the birth of our daughter, my wife decided to suddenly leave her partner and we would run an advertising agency out of our home. Blazic Design was born.

The business thrived and we had marquee clients throughout the Las Vegas Valley. We went to all the A-list media parties and show openings. It was a golden time.

Life took a sudden turn for the worse in 2005. My wife left me in February, my father died in March and a week later my cousin died. My life was shattered.

Since my wife was our primary graphic designer, she provided our signature work. When she left, Blazic Design became just Blazic. I could never find designers to come close to the quality of work my former wife had produced. The costs of fighting with freelance talent and poor quality work sunk my ship. By 2006, it was all over.

Along the way I had made some costly investments - a stem cell banking company that may never pan out, a land deal in Arizona that might be a fraud case and a Ponzi scheme involving apartment refurbishing (which is tied up in an SEC investigation).

In 2006, I had to sell the home we built. I moved out of my dream home on my 50th birthday. Stress mounted and I suffered a nervous breakdown. Just before the breakdown, I had secured a job working for a small ad agency. However, when I arrived for work two days after I moved, I couldn't think and speak. By Thanksgiving, I was unemployed.

In January of 2007, I decided to become a stock and option trader, working from my home with my own money. Not quite a day-trader, but very close. After a few months of struggling, I became wildly successful, making in months what some people would kill to make in a year. I bought a big house, anticipating selling it for a profit down the road. Even though the housing market had been declining, I misjudged and thought we were near a bottom. Wrong! Then my trading went south.

Not making enough in the markets and still paying my bills was eating away at my capital. Eventually, I was completely broke. I had to sell my furniture and possessions to keep the lights on. One day, my water was shut off. A friend of mine at the Water District paid my bill and got my service resumed. Thanks, Sam.

I struggled to find work. Former comedian, failed ad executive and broke stock trader are not things that spark excitement in any HR department. I wound up in a vacuum cleaner store, selling, assembling and servicing vacuums. I'm allergic to cats. The hair and dander in the vacuums was killing me. I couldn't breath. Then the anxiety attacks raged. I quit in February of 2010, the last time I have worked. A month later, I was off to my new home in Cleveland.

Through all the ups and downs, the absolute joy of my life has been my daughter. She completely changed my life. She's my best friend and my favorite girl/woman in the world. Leaving Las Vegas and leaving her behind with her mother is what killed me the most. I miss her and Las Vegas so much.

To my daughter, I was always her favorite playmate. Since I had given up the stage in 1997, she was my new audience and I loved performing for her. She has her Dad's joke genes in her and she cracks me up as much as I crack her up.

I remember when she was about nine months old. She was sitting on my lap in a big swivel chair. We were sharing a Tootsie Pop. She'd take a lick, I'd take a lick. After several turns, it was my turn again. She raised the Tootsie Pop to my outstretched tongue and at the last second before contact, she yanked it away and blurted, "Ha."

When she was four, on the 4th of July we headed over to the park on Hualapai off of Cheyenne. It overlooks the valley. You can see all the different fireworks displays and all the backyard fireworks from there. It's a beautiful sight. We sat in folding chairs, holding hands. As we watched the bombs bursting in air, without prompting, she began singing God Bless America. That was a bath-time standard of ours. We always sang God Bless America as loud as we could. When she began singing on that 4th of July night in her soft voice, it brought me to tears.

In 2005, when my father suffered a terminal stroke, we had to go to Cleveland to wait until he passed away and then attend the funeral. I was feverishly preparing for the trip because I had a lot of work that was on deadline and I needed to gather up all the files to get the work done. My daughter kept reminding me, "Dad, we have to get to the airport. You need to pack." She did that three or four times. Finally, she comes in and announces, "Dad, you're packed. Let's go."

I went into my bedroom and on my bed was the suitcase. There were shirts, pants, underwear, belts, everything except my suit and tie for the funeral. I could have left right then, if I didn't need the suit. My baby was four at the time. I've never had a woman pack my bags in my entire life and a four year old does it, nearly to perfection. She's a special kid.

Our best times were when we didn't have all the fancy accoutrements of modern life. One of our favorite games was to go to Starbucks and spend the afternoon spinning quarters on the table. Another was going to Dairy Queen and buying a balloon. We'd inflate the balloon and stretch the opening to make squealing sounds that were just hilarious. We could have fun with a ball of aluminum foil. And we loved going to the park.

I also loved picking her up from school. When she'd spot my black Toyata pickup truck and start running and screaming, "Daddy! Daddy!" Her excitement was so contagious. No matter how bad my day had been, Punkin' was here and it was time to play.

Now, my little girl is 2,300 miles away. I haven't seen her in person since December of 2009. Thank God for Skype. We get to hook up via computer once or twice a week. (Which has deteriorated to once or twice a month because my sister has had computer problems and schedule conflicts. I really want a computer with a camera.) We usually talk on the phone every weekend and a few times during the week. Lately, I've been reading all the Harry Potter books, trying to catch up to where she is in the series. It gives us something to talk about.

Things haven't changed. She still gets so excited every time she sees me appear on her computer when we Skype. We make each other laugh and then she directs me to games we can play on the computer. We can't play each other, but we play simultaneously and to her that's as good as us being together.

It's brutally hard being physically separated from the person you love most in the world. Today, it's been a year since I left Las Vegas. I'm doing better. I spent some time in a psychiatric hospital. I have medications, a psychologist and my colon is in good shape. I have no job prospects and am not sure if I'd be capable of working. I'm still having anxiety issues.

When will I return to Las Vegas? I have no idea. That is the hard part.

In light of the tragedies in Japan, my problems are small. Many people will never see their loved ones alive again. I can still hold on to hope and be thankful for my cell phone and for Skype. It's the best I can do.

Four years and three months ago, I quit drinking. I've been sober ever since. So, St. Patrick's Day won't have any green beer for me. I can't cook where I live, so the corned beef won't be simmering. I have a mental illness support group to attend tonight. And my daughter will be 2,300 miles away.

Even though my sister and I did not fly out of Las Vegas until March 18 in 2010, when we cruised The Strip heading north on St. Patrick's Day and passed the tourists and the music, I knew it was going to be my last view of the town, Las Vegas I loved so much, and had no idea when and if I'd ever return.

I hope you have a great St. Patrick's Day. Drink responsibly and hug someone you love.


Related Articles:
A Short Story: A Clown Without A Circus
Father's Day 2011 - I Don't Know What To Think, But I Know How I Feel
My Blog Is Dead And So Am I - Save My Blog