March is Colorectal Cancer Month and the perfect time to talk to your health care provider about a colonoscopy. Colorectal cancer claimed over 50,000 lives last year in the U.S., with over 140,000 new cases reported. Prevention and early detection are the keys to fighting this cancer, which has a mortality rate among cancers that is second only to lung cancer.

In January, my primary doctor (who happens to be absolutely gorgeous and I would do ANYTHING she asked me to do) suggested I schedule a colonoscopy, since I had never had the test and I was over 50.

A colonoscopy is performed by a gastroenterologist. The physician inserts a small tube with a camera on the end of it in the rectum and checks the entire length of the large intestines.

I called the gastroenterology department at the hospital and scheduled an appointment for Wednesday, March 9 (yesterday).

When I was scheduling the appointment, I asked the lady on the phone, "Will this be done in 3-D?"

There was a long pause on the line and then I had to tell her, "Look, it was a joke. But I would like to put this on YouTube if possible." She didn't laugh. Oooops.

Preparing For A Colonoscopy

Preparation for a colonoscopy begins three days before the procedure. You cannot eat tomatoes, corn, beans, nuts or anything that has red or blue dye. At the last second, I realized that ketchup is made of tomatoes - duh. Almost stepped on that land mine.

Prior to the day before the procedure, you will need two prescriptions filled. 1) Dulcolax Laxative or a comparable generic brand. 2) Polyethylene glycol, which comes in a 4 liter container. There is actually a small amount of the solution in the bottle, you add water to fill the bottle to the top. Some brands come with a flavor pack - usually lemon - which I highly recommend adding to the mixture. Shake well to mix.

TIP: Prepare the polyethylene glycol (colyte) two days before your procedure. Refrigerate it. It keeps for up to 48 hours. My pharmacist made a point to tell me, "It will taste a lot better if it is really cold."

The Day Before The Colonoscopy

No more food. You are only allowed to consume clear liquids, tea or coffee. Clear liquids can include chicken or beef broth. You can also consume Gatorade - any color, except red or blue.

At noon you take four (4) of the laxative tablets. They should produce results in two to three hours.

At 5 pm you begin drinking the colyte solution. You drink 8 ounces every 10 to 15 minutes. The solution has a salty, lemon taste. My solution was very cold and it was tolerable. Most people complain about the taste. They probably did not have it cold enough, and you cannot add ice to it. That is why I recommend mixing it the day before and chilling it overnight.

My pharmacist also suggested that I gulp the liquid, rather than sip it.

So, I started gulping the colyte solution every 10 minutes. Once you begin drinking the colyte, YOU DO NOT WANT TO BE FAR FROM A TOILET. It should start taking effect within an hour. You will not be passing gas for the next couple. If you get an urge, GET TO THE TOILET!

Your goal is to keep taking the colyte until your bowel movements are clear or yellow. Within 90 minutes to two hours, you should be done drinking the colyte. You have to drink at least half the bottle.

TIP: Make sure you have plenty of SOFT toilet paper. You will have frequent bowel movements and you don't want to grind up your...

The Day Of The Procedure

You are only allowed to consume 8 ounces of clear liquid no sooner than four hours before the procedure. I am on several medications and was advised that I should continue to take them.

TIP: Getting a morning appointment means you'll be able to eat sooner. (Mine was scheduled for 3 pm)

About 11:30 am, I got a call from the hospital and they said I could come in as soon as I could get there. So I called my sister and she picked me up an hour later.

You cannot go by yourself to this procedure. YOU MUST HAVE a responsible adult to take you home after the procedure. You are sedated during the colonoscopy and it is unsafe to drive afterwards. You cannot take a bus or cab home. They will not perform the procedure if you did not follow the bowel flushing routine and/or if you do not have someone to drive you home.

Once I checked in at the hospital, I had a short wait before a nurse came to take me in the back. I was assigned a bed, given a large plastic bag for my clothes and instructed to strip to my socks and put on two hospital gowns - one with the back open and one to cover the back.

I was getting a bit nervous. My nurse, Jen, said she would start an IV in my arm. I hate blood. When she pierced my vein, I felt a little woozy and yelled, "I'M AN INNOCENT MAN. I NEVER KILLED THOSE PEOPLE. I DON'T DESERVE TO DIE." Jen slapped me and told me to get a grip.

On the wall was a sign that read: Please tell the nurse if you are pregnant. So I did. The lady in the next bed broke out laughing.

After about a ten minute wait, I was wheeled into the procedure room. My doctor introduced himself. "Hi, my name is Dr. Escary. I'm not scary. I'm Escary." Hey, finally someone who wants a little levity.

The attending nurse told me she would be putting a sedative into my IV. I was told that for some people it knocks them out completely; for others it just calms them down and they remain awake throughout the procedure. She said that most people fall somewhere in the middle - they go in and out of consciousness and only remember parts of the procedure. I kinda fell in that category. 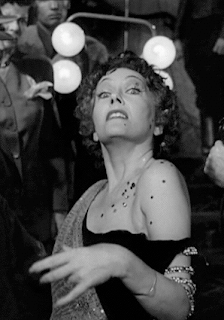 Right when I was starting to get drowsy, I spread my arms, batted my eyes and looked toward the ceiling. Stealing a line from Gloria Swanson in Sunset Boulevard, I uttered, "I'm ready for my close-up Mr. DeMille." No one got it.

Dr. Escary started with a quick prostate exam, and then began working the camera into my rectum. My nurse told me that the camera also pumps air into the colon so that it expands and everything can be seen easily. She told me to, "Turn on your left side, breath deeply and fart as often as possible, that will relieve any pressure." Hey, my kind of date.

During the procedure, I was drifting in and out of consciousness, but I did manage to catch a few minutes of the camera moving through my colon on a monitor that was just above my right hip. My colon was damn clean.

After about a ten minute wait, I was allowed to dress and move on to get the results of my test and sign my discharge papers. There were no polyps or hemorrhoids - that is what they are looking for. I have a very healthy colon and was told that I needed this done again in ten years. I was so proud, I wanted to have a gold star put on my ass.

When I left the hospital, I felt a little groggy, but coherent. My sister drove me home and I finally had something to eat.

Overall, it was relatively painless and made me feel a lot better about my colorectal health. Contrary to what I've been told in the past, the doctor did not find my head up there.

If you're over 50 - man or woman - ask your physician about a colonoscopy. You'll be taking a big step toward preventing the number two cancer killer.