Living In A Wheelchair Has Its Frustrations 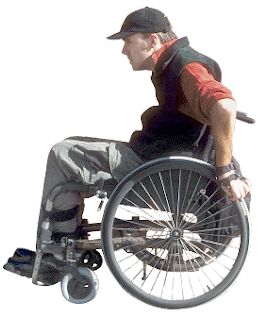 For the last couple hours, I've been putzing around with various story ideas. I started one article and then another; researched three more and still was staring at a blank page. Then, something happened, right before my eyes. I suddenly gained a new understanding that living in a wheelchair has its frustrations.

I was outside Dunkin' Donuts catching a smoke, huddled against the side of the building, trying to avoid the pouring rain. Out of the corner of my eye, I caught a large black gentleman with a brimmed knit hat and white nylon jacket racing down the sidewalk in a motorized wheelchair. He shot for the door of Dunkin' Donuts and I opened it for him; then opened the second door of the entrance.

He started complaining, "I'm trying to catch the bus. Two came and both of the lifts didn't work." He was soaked.

One of the clerks at the store let him use her cell phone to call the bus company. They said a bus would be along shortly. The man, whose name I came to learn was Myron, shoved on the controls of his wheelchair and whipped around, heading for the doors of the store.

A bus was coming down the boulevard. Myron, however, had to race down the sidewalk to the end of an iron fence that was between him and the bus stop. Myron got to the end of the fence, made a quick U-turn and bolted for the bus stop. The bus stopped quickly, dropping off a passenger, closed its doors and sped away.

Myron came back into the store and said, "This is bullshit." I agree.

He was back on the phone again with the bus company. After hearing that his problem would be solved soon by another approaching bus. He let out a sigh as water dripped from his soaked jacket, pants and wheelchair.

I asked him if he ever had this problem before, he said, "No. But today with the rain, it's really drivin' me crazy." I offered to buy him a cup of coffee.

One of the clerks said, "We'll give him a cup of coffee, free of charge."

Myron thanked me and asked if I was the owner. Wearing a gray hooded hip-hop sweatshirt and jeans isn't exactly what I'd call "owner" attire. I laughed and said, "No, I'm not the boss. The girls are going to take care of you." He was very grateful.

Eventually, a bus came and Myron was able to get on and head where he was going.

A couple weeks ago, most of the snow had melted on the sidewalks, however, there were piles of snow still crowding the sidewalk ramps. I saw a young black woman in a motorized wheelchair being followed by what I assumed were her two preteen children.

There was about five or six inches of snow at the base of the sidewalk ramp. She rushed her wheelchair toward the snow, hoping to blast through it. She got stuck. Her kids struggled to pull her heavy wheelchair off of the impeding snow. Once they freed her, she backed up and made another attempt to ram through the small pile of snow. Again, she was impaled on the obstruction. More pushing and shoving by her children and she was freed again.

Finally, she made a decision to head down the sidewalk to a cleared driveway and cross the street there.

In 1990, George W. Bush signed into law the Americans With Disabilities Act (ADA). It ensured that people with handicaps would not be discriminated against, primarily with regard to employment, access to public buildings and housing and that telecommunications providers would develop systems to allow the disabled access to their services.

Even though this law has compelled construction to comply by providing access to new structures, many of the homes in this country were built before 1990. Even if a home is single-story, with a basement, the first level of the home can be a foot or more above the ground, which makes wheelchair access virtually impossible. Ramps need to be built.

Understanding how difficult mobility can be for those in a wheelchair is why I get so infuriated when able bodied people park in handicap spaces.

No one that is in a wheelchair asked to be there. As with any disability, a large part of survival is to accept your fate, and then do the best you can to function within its parameters.

Myron handled his situation with mild frustration and grace, today. We can all learn a lesson from that.

The next time you see someone with a mobility problem, open the door for them, offer to help them reach something on a high shelf. Acts of kindness like that will show that you know that living in a wheelchair has its frustrations and you're willing to help make that person's world a little better.


If you enjoyed this article, share it with friends using the buttons below. Bookmark this site. Comments are welcome.
.