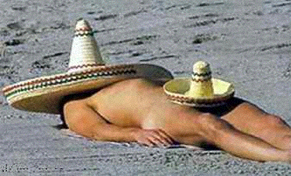 The terms and conditions of flying have changed these days. Increased security has taken searches to a new level. The TSA has the ability to do full body scans, in essence leaving you naked to the peering eyes of minimum wage employees. That is why I need penis enlargement for airport security.

My first attempt was to wear six condoms. This did not produce the right effect. A radial penis does not impress anyone.

Then, I tried using a long skinny water balloon. However, I didn't put enough water in the balloon and it looked like I had a knee-high testicle - a third one at that. I didn't achieve the desired visual for the cameras, but I did get suggestions to contact Ripley's Believe It Or Not.

Another attempt at male enhancement came when I purchased one of those giant Summer Sausages - you know, the kind you can only buy in the winter around Thanksgiving or Christmas. This got some great stares from the airport staff and I did get three phone numbers - two from women and one from a man. But the drug sniffing dog at the airport caught wind of me and chomped on my meaty prosthetic. Two people fainted when I didn't make a sound.

The worst idea I came up with was putting two hamsters in a sock and stuffing it down my pants. While I was waiting in line, the hamsters started to mate. Long before I got to the scanners, I was getting a lot of attention as my zipper was flexed to its maximum, over and over.

When I got to the scanner, the hamsters showed up as clear as could be and I was rushed to the Animal Protective League and then whisked away to a mental hospital.

I don't see why everyone got so upset. If women can stuff their bras, then men should be able to fake a bigger penis.

I'm still dreaming up ideas because I need penis enlargement for airport security - and I won't stop until I erect the perfect faux manhood.