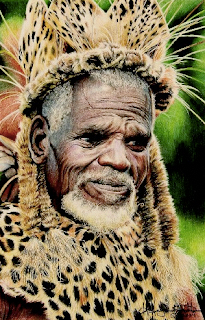 While working on my blog at Dunkin' Donuts, a large group of very well dressed black people came in. They milled around and chatted. After about half an hour, I turned to a guy behind me and said, "Did you all come from church?" He replied, "No, we're Jehovah's Witnesses." A very pleasant conversation ensued. He pressed for contact information. All I gave him was my blog address. He gave me an email address. Will my life change because I met a Jehovah's Witness?

Don't worry, I've already removed the doors from my house and bricked them shut. I enter the house through a window now. I'm prepared.

Having formerly lived in a community with a large Mormon population, I'm used to well dressed missionaries knocking at my door. I usually invited them in and either tried to get them to join Amway or tried to get them to my Christian church. They always gave up in frustration and left. But I sure had a damn good time.

A surefire way to get them to run is to answer the door naked.

This might not work so well if you're a woman. I'd suggest getting an inflatable sex doll and telling them that the doll is your lesbian lover.

I've often wondered if door-to-door proselytizing works. I knew a Mormon who did his two year mission in Central America. In two years, they had two people that were interested.

My brother's Christian pastor moved his whole family to predominantly Muslim Kosovo. Same results, a couple people interested in two years. It seemed like a tremendous risk and burden to haul a wife and three kids to a war-torn country and come away with practically nothing.

When I was in advertising, I learned that commercials don't make people jump off the couch and do something.

Just because I see a Victoria's Secret commercial doesn't mean I'm running out and buying a new bra. OK... that might be a bad example. But you get the idea.

Missionary work is like a door-to-door commercial. Maybe we should have a remote that can switch the missionary to something else. Don't like the Jehovah's Witness, ZAP, Sportscenter. Once you get the score updates, you can close the door.

Jehovah's Witnesses commit to missionary work their whole lives. Mormons require a two year mission. I'd rather see them join the Army for two years. They'd be helping their country, they'd get education and medical benefits and they can really help change the world.

You can't stop any of these people. You just have to figure out how to deal with them.

Until the next one shows up at my window (remember, my doors are bricked up), I'll be sitting in my living room in my Zulu Chief's outfit, waiting to scare them off.

How To Escape After Farting In Public
Living In A Wheelchair Has Its Frustrations
Every Store I Go To People Think I Work There, So I Play Tricks On Them