How To Escape After Farting In Public 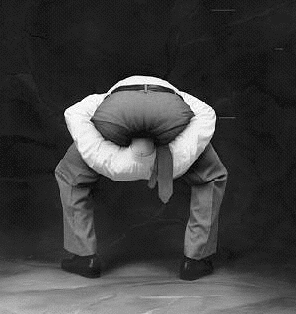 We've all suffered that wretched moment when someone unloads a butt biscuit in a public place and we're caught like first-responders to a horrible accident. You're first instinct is to look around for a culprit, so you can give them the evil eye or think horrible thoughts about what they ate earlier in the day. But what do you do if it is YOU that leaks the methane cloud? Here's how to escape after farting in public.

Before I give you cover-ups and escape routes, you have to understand the pecking order when it comes to identifying suspects of foul rectal emissions.

Now that you understand the pecking order, I'll address specific public situations where you will need to create a cover-up or escape the scene.

There is nothing worse that strolling down the cereal aisle and being stunned by someone's rectal propulsion. Immediately, you look around and shuffle through items 1 through 5 to find a culprit. But what if it's you?

Speed is your best friend here. You need to evacuate the scene as quickly as possible. When you get to the end of the aisle, you need to turn in the direction opposite the usual flow of shoppers and move at least three aisles away. If you move down a few aisles in the normal direction that shoppers flow through the store, someone may catch up to you and you'll feel those evil eyes burning through your back. Your goal is to make it appear that you have yet to come upon the nasty nugget, but for some reason you don't need cereal that day and you skip that aisle.

One time, I was in a grocery store in South Carolina. There was a gigantic black woman who filled the aisle from side to side. I did not think I could get my cart around her. When I approached her, I caught a stench that nearly dropped me to my knees. I don't think this was gas. My guess was that this was body odor and the woman smelled like a dumpster behind a fish restaurant. God, it was awful. I had to move two aisles away, just to get away from her mushroom cloud.

This is one of the trickiest environments to rip one and get away with it. Your only hope is that the elevator is crowded and you can sneak it out. If you pull off an SBD (Silent But Deadly) you need to rivet your eyes on the door and keep a straight, almost stern face. Look like you have a lot on your mind or you're thinking about ending world hunger.

Being in an elevator by yourself and dropping a butt bomb can have horrible results - unless you're getting off on the next floor and you're wearing a hood, scarf or hat and you move quickly from the scene. You could have some unsuspecting rider walk face first into your, Ooooops, and you have nowhere to go. If the new rider makes a comment, blame it on an old guy that got off the floor before.

You're also busted if it's just you and one other person on the elevator. Look at the ceiling until your floor comes up.

This is a place where the pecking order of suspects clicks off rapidly until a potential offender is spotted. That's why it is always good to sit next to an old guy. If you let one out, everyone will immediately focus on the old guy. You should be in the clear.

If you feel that there might be considerable sound involved in your discharge, wait until the choir kicks in. Your blast could be mistaken for one of the angel's trumpets and no harm will be done - then everyone will look for the old guy.

If it's a matinee and the theater isn't very crowed, let it go. It's dark. Teenagers will giggle. You're pretty safe. However, if it's a crowded theater, you have to have a cover-up strategy ready. Wait about one to two minutes for the smell to start circulating around. This increases the number of possible suspects. But your main goal is to eliminate yourself from the suspect lists of those immediately adjacent to you. After a little marination, comment to whoever you are with, "Jeez, who let that one go?" You'll be the voice of all the others who were offended and they will bond with you in seeking out the real culprit. You're off the hook.

If you fire one off in a restaurant, you have to act quickly. You immediately get your date or whoever you are with to fix their gaze on the oldest or fattest person close by - unless, of course, you are the oldest and/or fattest person in the vicinity, then you're screwed. Even if you didn't do it, check the pecking order, you'll catch the blame.

It doesn't matter how many people are in the car, just hope you're next to a window. When you feel the pressure building, quickly fake an illness and shout, "I'm dizzy, I need fresh air." Immediately lower the window, then shove your head out of it like a dog and let the air whip your hair around. Hopefully, the influx of fresh are will dilute whatever you emitted and you should be in the clear.

This tactic may fail in a rainstorm. The downward pressure of the falling rain may trap the air in the car and everyone will start gagging. Oh well, you can't win them all.

Right Before Entering A Car

The most embarrassing situation is when you are on a date, especially a first date. You get the urge as you're approaching the car and figure it's safe to sneak it out and then slyly slip into the car. WRONG!

Farts linger. If you just dropped one outside of the car, suddenly notice something in the area to point to and distract your date, "Say, look at that billboard. Have you ever seen a billboard like that before?" A minute or two of mindless conversation will put some drift on the stink bomb and you'll be able to enter the vehicle without dragging it in behind you.

Here, a speedy exit is all you can do. You need to pick up the phone, act like you dialed someone important and then yell, "I'll be right there." Get the hell out of your cubicle or away from your desk. If you move fast enough, the others will start looking for past offenders and pin the blame on them.

Crowds and noise are always to your advantage. You can safely release the build-up from a double bean and cheese burrito in a noisy crowd and just keep moving. Around construction sites or near buses, you can go to town.

Life has enough embarrassing moments. These techniques on how to escape after farting in public should keep you off the wanted list and let you freely putz through your day.

More laughs: I Have To Run To The Bathroom Real Quick. I'll Be Right Back