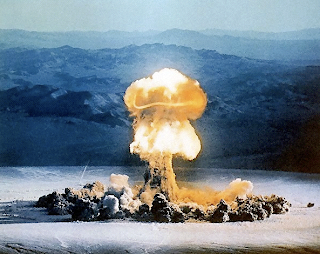 Several years ago, while doing research for a Bible study class, I ran across a chat board run by atheists. Most of the people there were extremely intelligent, however, most espoused the same atheistic talking points. One of the lines I've heard over and over since I first stumbled into that chat room is, "More people have been killed by religion or in the name of God than anything else." This is Atheism's big lie against religion.

It always amazed me how people simply nodded their heads in agreement every time this lie was spewed. I, too, was like a dimwitted bobblehead when it came to this subject.

"Oh yeah, the Inquisition, the Crusades. If people didn't believe in that silly sky god, we'd be so much better off. Organized religion is horrible." I'll address organized religion in a future post. Right now, I want to concentrate on the death tolls of human events - mano-a-mano.

I spent several hours scouring websites for data that was footnoted or had supporting documents. I ignored the hyperbolic numbers uttered on emotionally written sites.

Below is a list of the top 15 events in history that have exacted large human death tolls. Deaths from disease and plagues are not included in this list. 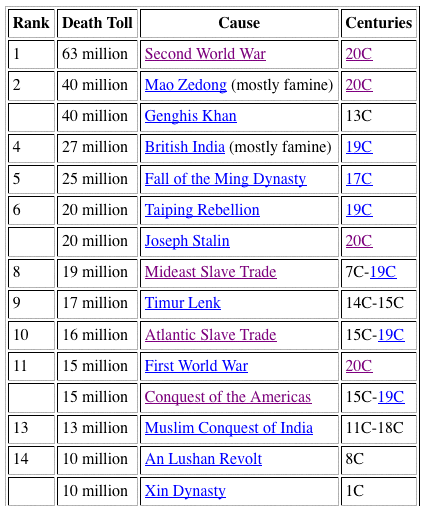 This website is very well documented and you can dig deeper into any of these calamities. Click here. Scroll down and you'll find the complete list of the Top 20 Worst Death Tolls.

Another list is available on Wikipedia. It gives ranges of death tolls, because exact figures are hard to determine.

When you get real figures, it shows that World War II was the most costly mano-a-mono event in human history as far as lives lost. Figures range from 54 million to 60 million deaths worldwide.

The Black Plague or Black Death claimed almost a third of the population of Europe in the 14th Century, with a death toll in excess of 100 million people.

Wars and governments caused the greatest number of casualties until you get to the Muslim conquest of India - which claimed approximately 13 million lives.

On the Wikipedia sight, the first religious war listed was the Holy Roman Empire's "Thirty Years War" from 1618 to 1648. Between 3 million and 11.5 million people died, a long way off from the death toll of the 2nd World War.

A favorite religious borne tragedy that atheists like to whip out are the Inquisitions. Inquisitions were carried on over about a 100 year period. One site claimed that 5 million people died during that period.

PBS has been running a series called, "Secrets Of The Inquisition." The Catholic Church had kept the transcripts of the Inquisitions secret until 1998 - when they were released to scholars. About ten years later, the information was opened to the public.

According to the PBS program, the Spanish Inquisition was the bloodiest of all of the Inquisitions. Approximately 19,000 trial transcripts were uncovered - 12,000 of those tried were sentenced to death.

The Papal Inquisition, which was carried on in northern Italy, in and around Venice, claimed between 3,000 and 5,000 lives. Other Inquisitions during that one hundred year period did not rival the Spanish and Papal Inquisitions as far as deaths. Even with a broken calculator you can't get close to the 5 million deaths reported on that one site.

Here's a figure to chew on. Over 45 million abortions have been performed in North America since 1973. (But I know we can't talk about that.)

Yes, people have died in the name of religion throughout time. A big part of the reason was that in the early centuries, religions were the government. Imperialism, mixed with religion were the driving forces behind many of the conflicts.

Regardless of the reason, it does not excuse the cost of human lives taken in the name of religion. But secular man has been much more violent toward his fellow human beings - and that is a fact.

When you get in discussions with atheists, you need to be prepared. Do your homework.

So, now you know atheism's big lie against religion - more people have died in history because of God and religion. Tell them the facts and move your argument on to a different point.